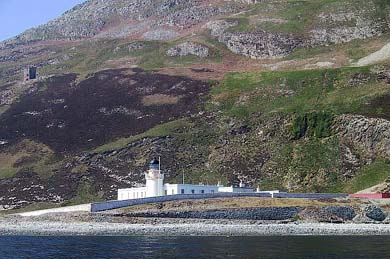 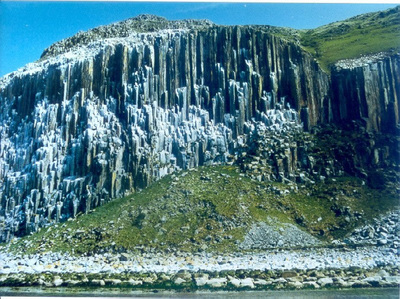 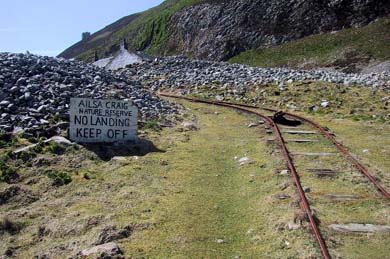 Rail Track Used By Miners (c/o Ann Bowker)
Ailsa Craig is about 10 miles west of the coast of Girvan in the South of Ayrshire. The island, which can be seen from just about anywhere on the Ayrshire coast, measures 3/4 of a mile long by 1/2 a mile wide.
It is known that Ailsa Craig was owned by the Abbey at Crossraguel in the early 1400's, when apparently, ambitious and therefore recalcitrant abbots were sent here to keep them from temptation !! In those days, abbots weren't necessarily men of holy orders, so it must have been a busy place. Nowadays, the really energetic visitor may have a chance to climb to the top, via the path that passes a ruined castle. The castle had three storeys and was built by the powerful Hamilton family in the late 1500's, after Philip of Spain tried to capture the island for himself.

The exporting of birds' feathers was an important industry in days gone by, and it is said that Robert Burns ordered a quantity for a new bed when he married Jean Armour. Other writers have been influenced by Ailsa Craig as well, and both Keats and Wordsworth have mentioned it in their work. Oddly, Burns makes only fleeting mention of it.

Granite was mined from Ailsa Craig from the early 1800's to about 1971 for the making of kerb stones and curling stones, though recently, there has been a bit of a revival of quarrying, with one factory being licenced to take the granite. The items are made in Mauchline and exported all over the world. From a maximum population of around 30 people comprising the lighthouse keepers and the granite miners the islands is of course these days home to nobody other than the birds. So many birds in fact call Ailsa Craig home that it's actually the third largest gannet colony in the world with around about 70,000 birds.
Books. DVD's and Videos

The only book dedicated to Ailsa Craig is an old one called "Ailsa Craig - It's History And Natural History" by Roderick Lawson. This book is very difficult to find, but Amazon do have it listed. Whether or not they actually have it, or will ever have it, seems doubtful.
Links
Ailsa Craig Trips - Take a trip to or enjoy a sail around Ailsa Craig aboard the M.F.V Glorious