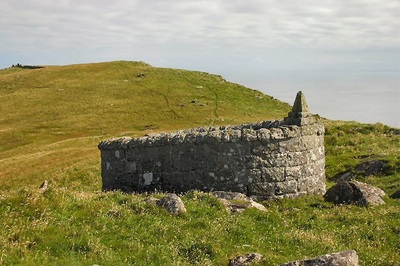 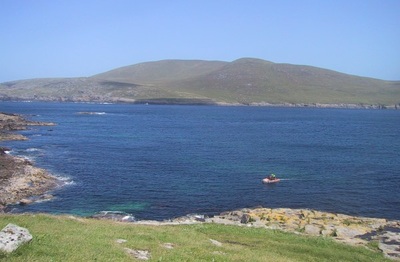 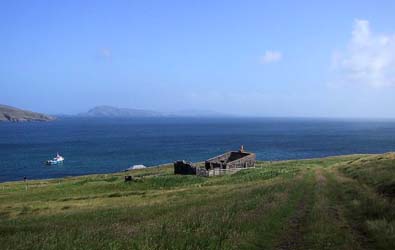 Often referred to as "Barra Head", Berneray is the most southerly of the group of islands known as the Bishops Isles which are to be found at the Southern tip of the Outer Hebrides. Mingulay it's nearest neighbour is less than half a mile to the north as the above picture clearly shows. At only 1.75 miles long and 0.75 miles wide Berneray is the smallest of the Bishops Isles.
Inhabited since the Iron and Bronze ages Berneray was studied as part of survey in 1992 by archaeologists from Sheffield University. A large number of sites were discovered including burial monuments, neolithic chambered tombs and Bronze age cairns. The Iron age is represented by the most prominent ancient site, Dun Sron an Duin, located on the cliff bound promontory near the spectacularly positioned Barra Head lighthouse. 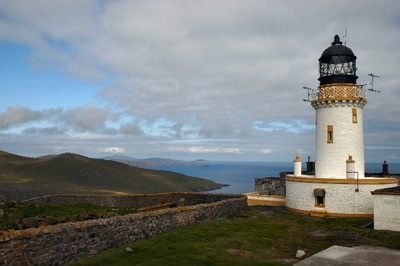 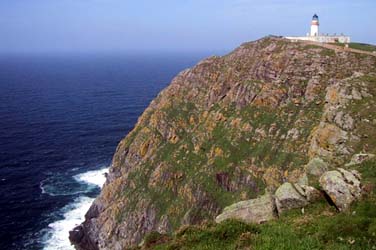 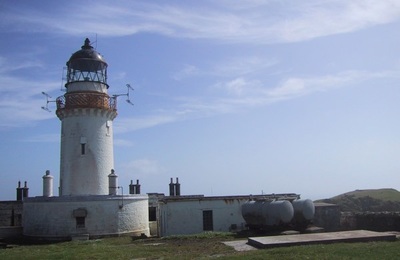 In more recent times Berneray had a population of around 20 in 1764 and 30 years later the community consisted of three families. These figures remained fairly constant until the Island was finally abandoned by the last of it's community in around 1910. Likes it near neighbour Mingulay, the people of Berneray lived by crofting, fishing and fowling. There were four crofts in 1840 and these remained until the end. For several years after 1910 the island remained populated by the lighthouse keepers who maintained the light at Barra Head. The light was fully automated in 1980 and since then the only regular visitors to the island are the lighthouse maintenace crews who now stay in purpose built accommodation units rather than the old cottages.

One of Berneray's most famous sons was known as Padraig Mor or "Big Peter". He was also known as the Barra Giant and on a visit by T S Muir in 1866 was measured to be 6' 8" when only 17 years of age. Peter Sinclair, to give him his full name, joined a travelling show for a while but disliked the publicity and returned home to Berneray. Peter used to bring his cattle to Castlebay in the summer months and run a dairy, returning to his home island in the winter.
Books. DVD's and Videos

Click to go to book's Amazon page
Links
Isle Of Barra - If visiting Berneray there is a good chance you will also be spending time in Barra which is the nearest inhabited island. This site will give you all the local information you could want.

Northern Light Charters - Superb website which contains many excellent images of the Scottish Isles...including Mingulay and Berneray. If you fancy the idea of visiting the Bishops Isles then this is the site to check out. Runs regular charters throughout the summer months so weather permitting you could be on your way to Mingulay !!

Barra Fishing Charters - Barra Fishing Charters caters for sea anglers wishing to experience the rich fishing waters of the Minch, family trips experiencing the porpoise, seals, otters and numerous seabirds round Barra’s coast, and groups wishing to visit some of the uninhabited islands off Barra which of course include Berneray.
www.lonely-isles.com - All content © Paul M Clements / Deena C Clements unless stated otherwise.
For anyone in any doubt, this site is simply a hobby, not a commercial enterprise.
Proudly powered by Weebly