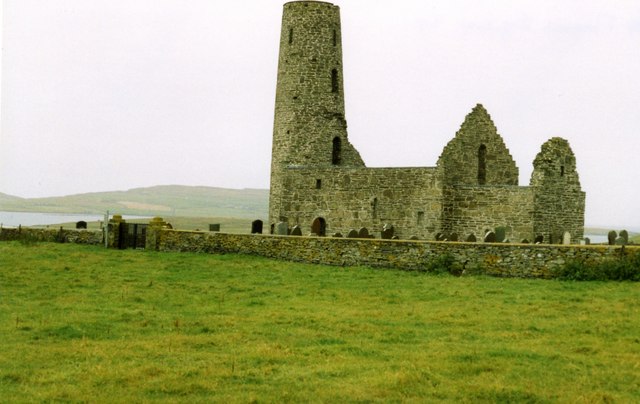 The island of Egilsay lies in the Orkney Isles to the east of the larger island of Rousay.
Egilsay is chiefly famous for the Martyrdom of St Magnus in 1115. Magnus and his cousin Hakon succeeded to the Earldom of Orkney in 1103 and ruled peacefully and successfully for ten years. Eventually, Hakon became jealous of Magnus' popularity and a meeting was arranged on Egilsay in April 1115 to settle matters between the men. It was agreed that each would take only two ships and an equal number of men to the island, but Hakon betrayed the agreement and arrived after Magnus with eight ships. The following morning Magnus refused to let his men defend him and was in the church praying when Hakon and his men came upon him. Magnus made three offers to Hakon, to leave for Jerusalem or Rome and never return, to go to Scotland and be taken into custody, or to be maimed and imprisoned. Hakon wanted to accept the last offer, but the chiefs refused to allow this and wanted Magnus dead. Hakon's standard bearer refused to kill Magnus, and so Hakon ordered his cook, Lifolf, to kill him. Before his death, Magnus forgave his murderers, and instructed the cook to 'hew him a mighty blow to the head that he was killed as a lord and not a thief'.

Although neighboring Rousay lacks rich wetland habitat Egilsay more than makes up for it with a range of lochs on which are found breeding waders such as Red Shank and Snipe, a number of duck species and a large black headed gull colony. Egilsay is one of the few islands where you can find the rare Corncrake, whose rasping, double call note still evokes memories of bygone days when they were common all over Orkney. The R.S.P.B. has acquired farmland on the island to protect this species.
​
From a population of nearly 200 back in the 19th century Egilsay is now home to just about 30 people. However, like all small islands the population are proud of their home and it's heritage and will continue to keep it alive.
Books. DVD's and Videos

Visit book's Amazon page
Links
Rousay, Egilsay And Wyre - Main point of reference for Egilsay and it's neighbouring islands on the web. Plenty of interesting facts for those planning a visit or just interested in the islands history.

Undiscovered Scotland - Rousay Ferry - Details on the local ferry that runs between Rousay, Egilsay and Wyre from the excellent Undiscovered Scotland site.
​
Egilsay Images - Small selection of Egilsay pictures from the Charles Tait's collection.
www.lonely-isles.com - All content © Paul M Clements / Deena C Clements unless stated otherwise.
For anyone in any doubt, this site is simply a hobby, not a commercial enterprise.
Proudly powered by Weebly