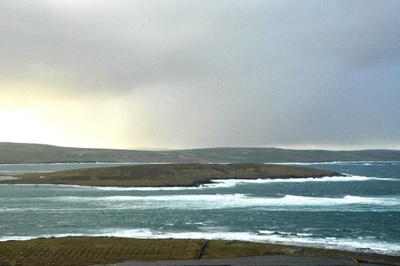 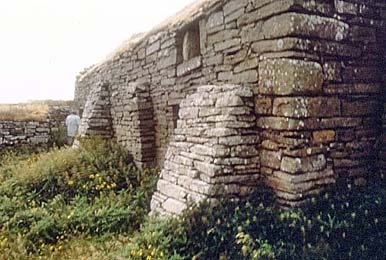 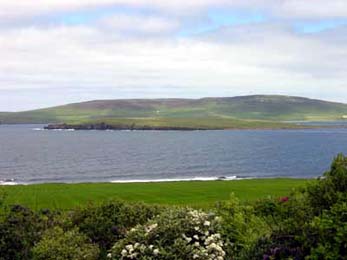 Eynhallow lies in the Eynhallow sound between Mainland Orkney and Rousay. Covering some 75 hectares the island is surrounded by reefs, shoals and dangerous tides making it a difficult place for all but the most experienced boatsman to land.
Eynhallow was in all probability the site of one of the earliest monastic settlements in Orkney and may only have been preceded by Christ Church on the Brough of Birsay. Although it was established after Earl Thorfinn's period of rule at the height of the Norse dominance, it almost certainly and Celtic antecedents.

The more recent history of the ruined church is of interest because it was only rediscovered by the islands owner David Balfour in 1851. The owner cleared the island when a virulent disease, possibly typhoid, killed several of the crofters living in the small interconnected settlement of houses. When the tenants had gone the houses were set alight as a safety precaution and it was only when the thatched roofs and timber partitions had burned away that it was seen that the stone walls formed parts of the old monastic buildings - church, cloisters, refectory and dormitories. It is probable that the domestic occupation occurred at the time of the reformation.

The church itself is thought to be early 12th century and is almost certainly part of the Orkney monastery to which Abbot Lawrence was appointed in 1117 according to the records of Melrose.

The ruined bothy by the south shore is in fact the old schoolhouse and 'The Lodge', a summer residence clad with corrugated iron sheet, was built by the then owner in the late 1800's. Nowadays it is mainly used as a research centre by Aberdeen University students for the study of fulmars.
​
Eynhallow is an island rich in tradition and history and in the past was known as an enchanted isle. It has, for instance, been known to vanish as ones boat approaches it. It was said that the only way to avoid this navigational disaster was for the helmsman to keep his eyes fixed on the island while clasping an iron object !!
Books. DVD's and Videos

Nothing out there, to my knowledge, with any great content about Eynhallow. This is not an island which seems to have merited much space in the history of our country. As ever please contact Lonely-Isles if you know of any books you think would be of interest and we'll add them to the site.
Links
The Freeing Of Eynhallow - Folklore tale of Eynhallow from the Orkneyjar site.

​Eynhallow Pictures - Excellent set of pictures of Eynhallow from the Charles Tait collection.
www.lonely-isles.com - All content © Paul M Clements / Deena C Clements unless stated otherwise.
For anyone in any doubt, this site is simply a hobby, not a commercial enterprise.
Proudly powered by Weebly