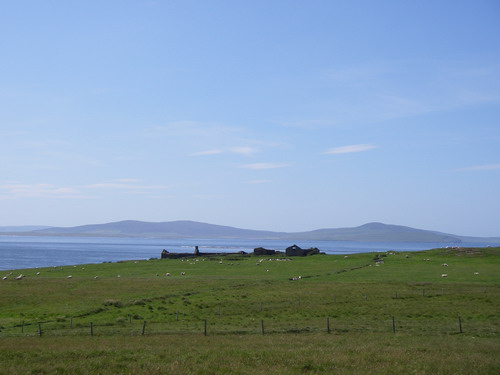 Faray and it's near neighbour Holm of Faray, which lies to the north, are to be found in the Sound of Faray between Eday and Westray. Faray covers an area of less than 200 hectares and reaches a maximum height of just over 100 ft in the centre of the island.
By the late 1930's there were eight families living on the island. They had crofts and supplemented their income by lobster fishing. The second world war then intervened and a whole new world opened up. Comparisons were drawn by the islanders and their simple but demanding lifestyle began to seem less than perfect. By 1947 the last islander had left Faray and, apart from occasional summer occupation, the island was deserted.

​The only man made relic of note is the chambered cairn beside Lavey Sound. It has now been proposed that the rich peat bogs of both Faray and Holm Of Faray should be made special areas of conservation. A road still runs up the central spine of the island serving the scattered empty houses.
Books. DVD's and Videos

Nothing out there, to my knowledge, with any great content about Faray. This is not an island which seems to have merited much space in the history of our country. As ever please contact Lonely-Isles if you know of any books you think would be of interest and we'll add them to the site.
Links
Doug Houghton Photography - This page of Eday pictures from Doug's site contains the only other photograph of Faray I've so far managed to find on the web !! The site contains many other excellent Orkney images and is well worth a visit.
www.lonely-isles.com - All content © Paul M Clements / Deena C Clements unless stated otherwise.
For anyone in any doubt, this site is simply a hobby, not a commercial enterprise.
Proudly powered by Weebly