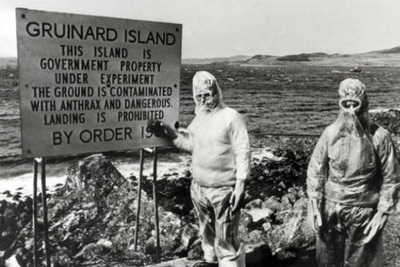 Visitors Beware!
Gruinard Island sits in Gruinard Bay, about halfway between Gairloch and Ullapool, on the west coast of Ross and Cromarty and covers an area of nearly 200 hectares.
This small island has a notorious history in recent times. However, back in the 19th century the island was home to a few hardy souls most likely involved in farming. When the people gradually left the island what once was a very small, and in many ways insignificant island, was about to become one of the most controversial places in Scotland.

In 1941 scientists worried about the possible use of chemical and biological warfare by the Nazis decided to do some tests on a lonely, uninhabited spot...and they chose Gruinard Island. What they did was to place 60 sheep on Gruinard and then expose the island to the deadly chemical anthrax. All the sheep not surprisingly died and their bodies were buried in a caved on the island under tons of rock. However, one of the sheep carcasses floated over to the mainland and infected some livestock. As there was of course a war on the affair was hushed up and the owner compensated.

Even 40 years after being polluted with anthrax large levels were still being recorded by the Chemical Defence Establishment. Therefore in 1986 the MOD took action by deciding to soaking the entire surface area of Gruinard in formaldehyde and sea-water. Sheep and rabbits were then reintroduced to the island to see if it truly had been disinfected. In 1990 Gruinard was finally declared free of anthrax nearly 50 years after what was now be looked upon as a foolhardy and unnecessary experiment.

Debate still rages to this day about whether the island really is safe to visit again but the sheep and rabbits now seem to be thriving once more. However, anyone planning a visit does so at their own risk!
Books. DVD's and Videos

Nothing out there, to my knowledge, with any great content about Gruinard Island. This is not an island which seems to have merited much space in the history of our country. As ever please contact Lonely-Isles if you know of any books you think would be of interest and we'll add them to the site !!
Links
Anthrax Island - Excellent article from the BBC Scotland website about the experiments on Gruinard Island.

Visit Wester Ross - If planning a trip to Wester Ross to see Gruinard Island and the surrounding area then this site should give you a few tips on accommodation and things to do.

Gruinard Bay Campsite - If you fancy pitching up on the shores of Gruinard Bay then look no further than here !!

Camusnagul - Useful collection of local information on the Wester Ross and Loch Broom areas.
www.lonely-isles.com - All content © Paul M Clements / Deena C Clements unless stated otherwise.
For anyone in any doubt, this site is simply a hobby, not a commercial enterprise.
Proudly powered by Weebly