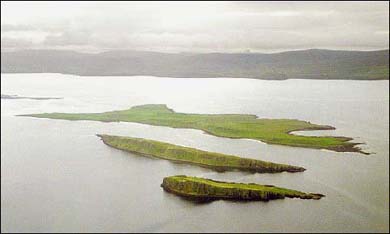 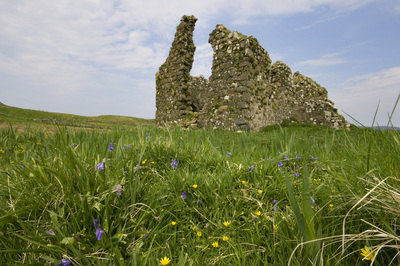 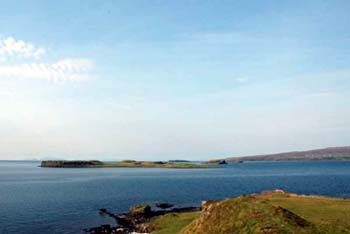 Isay and it's two smaller neighbours Mingay and Clett lie at the mouth of Loch Dunvegan in the North of Skye to the west of the Vaternish peninsula.
Olave the Black, a Norwegian warlord was said to have been the earliest recorded owner of Isay, Mingay and Clett. In the 16th century Roderick MacLeod of Lewis decided to eliminate two entire families so that his own grandson should inherit Raasay and the lands of Gairloch. To execute this evil plan Roderick invited them all to a banquet on Isay promising them that they would hear something to their advantage. Human nature being what it is everybody turned up and during the meal Roderick invited them out one at a time for a private conversation. Instead of a friendly chat each guest was in turn brutally stabbed to death !!

By the 1800's Isay was a thriving little Island. it was home to a fishing station and had it's own general store. A street of more than eighteen cottages and black house ruins line the east shore where there is also the remnants of a stone jetty. With the people now gone the land is now only used for grazing sheep.

In more recent times the three islands were owned by folk singer Donovan. In a bizarre twist the latest owners, Moneyedge, an English company have started selling off parts of Isay smallest neighbour Clett. People are offered a square foot of Clett and so far there hasn't been a shortage of takers. The only thing you are actually entitled to do is visit the island and you must always leave it as you found it.
Books. DVD's and Videos

Nothing out there, to my knowledge, with any great content about Isay. This is not an island which seems to have merited much space in the history of our country. As ever please contact Lonely-Isles if you know of any books you think would be of interest and we'll add them to the site !!
Links
Isle Of Clett For Sale !! - This BBC news article tells the tale of the attempt to buy off Clett, one square foot at a time.
www.lonely-isles.com - All content © Paul M Clements / Deena C Clements unless stated otherwise.
For anyone in any doubt, this site is simply a hobby, not a commercial enterprise.
Proudly powered by Weebly