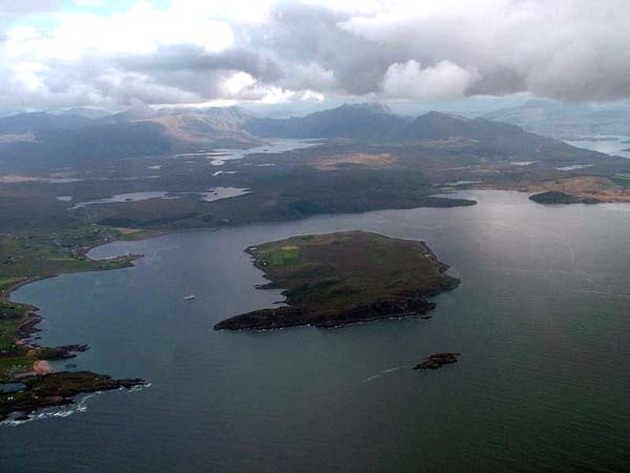 A sea loch on the coast of Wester Ross, Loch Ewe is 10 miles in length and lies between two peninsulas with the settlement of Poolewe at its head. The Isle of Ewe lies opposite Aultbea and Inverewe Gardens created by Osgood Mackenzie lie on an inlet to the east of Poolewe.
In the 16th century the Isle Of Ewe was said to be all wooded but nowadays the island is a working farm with the types of flora and forna to be expected in such an environment. In 19th century the island was leased by its owner JIH MacDonald Buchanan to the Grant family who have lived there ever since.
​
The only inhabitants these days are the families of cousins Roddy and Willie Grant. There were more families on the island in years past but most left around about the time of the second world war. Crofting and fishing sustains the dozen or so souls on the island but like so many of the small islands featured on lonely-isles those who remain are fiercely determined to continue the way of life they know.
Books. DVD's and Videos

Nothing out there, to my knowledge, with any great content about the Isle of Ewe. This is not an island which seems to have merited much space in the history of our country. As ever please contact Lonely-Isles if you know of any books you think would be of interest and we'll add them to the site.
Links
Gairloch And Loch Ewe - Probably the best link around for local information on this area. If planning a trip to the Isle Of Ewe this site should be your first stop.

Undiscovered Scotland - As ever this collection of pages features plenty of information on the area in and around Loch Ewe and the Isle Of Ewe. This page is the main link for the Gairloch section and everything you need to know about the local area can probably be found here or on other pages within the site.
​
Camusnagaul.com - Camusnagaul, Dundonnell - Little Loch Broom...This is an excellent visitor guide to the Wester Ross area around Ullapool, Dundonnell and Loch Ewe.
www.lonely-isles.com - All content © Paul M Clements / Deena C Clements unless stated otherwise.
For anyone in any doubt, this site is simply a hobby, not a commercial enterprise.
Proudly powered by Weebly