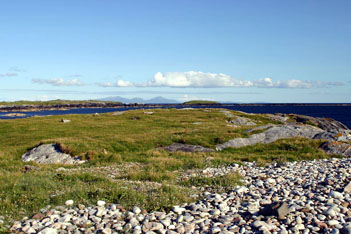 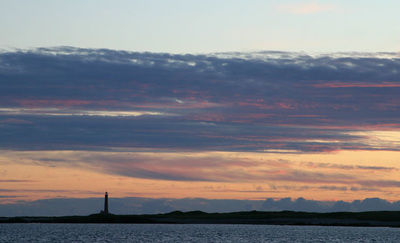 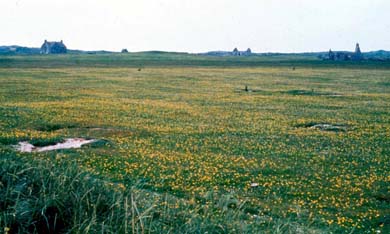 The Monach Isles are a group of five small islands which lie roughly 5 miles west of North Uist and Benbecula. The Monachs are also known by the Norse name the Heisker islands. The two main islands are Ceann Iar and Ceann Ear, in between which is found Shivinish. The final two small islands which make up the group are Shillay and Stockay.
One of the earliest references to the islands is in connection with the establishment of a nunnery attached to lona. The nunnery was set up on Ceann Ear, the most easterly island of the interconnected group. It is said of these nuns that they were so strong as to be able to handle large boats which they rowed across the Sound of Monach to North Uist, returning with loads of peat for fuel, which the island-group has always lacked.

The Norse name for the island-group was Heisgeir. But the association of the islands with a male monastery set up on Sillay, the westerly isolated island of the group, caused the name to be changed to Monach. It was part of the monks' duties to maintain a light on Sillay to act as a navigational guide to mariners sailing in the nearby western Atlantic waters. This light is supposed to have been sited on a rock, or altar. The religious associations came to an end after the Reformation.

The first recorded owner of the Monach group was Ailean MacRuairi 'ic Shomhairle, who also possessed Uist. He had connections with the dynasty of the Lords of the Isles. Much later (1644) the ownership fell into the hands of Lord James MacDonald of Sleat in Skye. In 1856 these MacDonalds sold Uist and the Monach Islands to Major lain P. Orde who passed over his property to the Duke of Hamilton in 1944. The present owner is Lord Granville, the Queen's cousin. 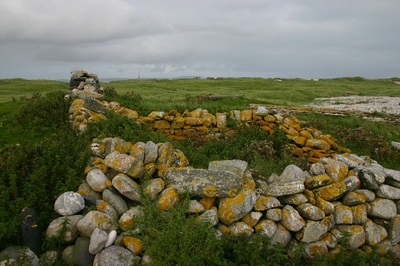 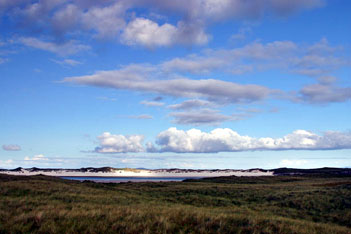 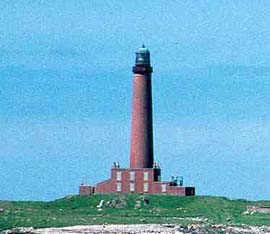 In 1810 or thereabouts, however, the population of the islands was almost entirely removed. The reason for the sudden exodus was the complete failure of the soil. The records point to over-grazing, which exposed large areas of sand. This erosion was coupled with a great storm which tore up the turf and covered the islands with still more sand. In an attempt to reclaim the land, sea-bent or marram grass was planted and in time the land recovered sufficiently to support a population again. By 1841 there were two farmers with their families, a female weaver and a herd, totalling 19 people. By 1861 this number had increased to 127,which included some visiting lobster fishermen from Ireland and Islay. In 1891 the maximum population of 135 was recorded. This figure included the native residents, twelve lighthouse keepers and their families and some twelve visiting fishermen.

After the turn of this century the population began to fall. In 1914 there were twelve families, probably about eighty persons;in 1921 the population numbered sixty-six. Ten years later it was thirty-three. The following year saw only two families on the Monach Isles and they left in 1942. The 1951 census showed the islands deserted.

In the old tradition of the monks who lived on Sillay, and who had felt it part of their duty to their fellow-men to warn sailors of the dangerous reefs round the islands, a lighthouse was erected on Sillay in 1864. It was 135 ft high and had a range of 18 miles. Tradition has it that this light was built on the same spot as the ancient altar which was provided with a continuous fire beacon. However, sea disasters did occur despite the Sillay light, which often failed to penetrate through the dense sea fogs.

The Sillay light was extinguished in 1942, during the Second World War, and has been permanently discontinued. The lighthouse keepers and their families were the last residents of the Monach Isles. In the winter months of 1936, two of the lighthouse keepers were drowned when the small boat in which they were returning from Ceann Ear to Sillay with mails was overtaken by heavy seas. A third keeper watched the tragedy from the lighthouse helpless to do anything for his fellow keepers.

The Monach Isles are now only occasionally populated by lobster fishermen who visit the islands and lodge in the houses which still remain in a reasonable state of repair.
Books. DVD's and Videos

The only book we are aware of with any significant content on the Monachs is Robert Atkinson's 'Shillay and the Seals'. This book, which describes a stay on Shillay, is out of print and very hard to find, but you may be able to get a copy if you are lucky. Other than Robert's book there isn't much else out there about the Monachs. Please contact Lonely-Isles if you know of any books and we'll add them to the site !!
Links
North Uist - Site packed full of history and local information on North Uist. Included is a comprehensive history of the Monach Islands with a small selection of photographs.

NorthernLight Charters - Award winning boat charter company who run a varied range of cruises around the Western Isles of Scotland. One of these includes a trip to the Monach Islands.

Student Photo's Of The Monachs - Durham Uni students studying seals have a small collection of photos of the Monachs. Also has some fascinating pics of other seal islands like North Rona and Isle Of May.
www.lonely-isles.com - All content © Paul M Clements / Deena C Clements unless stated otherwise.
For anyone in any doubt, this site is simply a hobby, not a commercial enterprise.
Proudly powered by Weebly