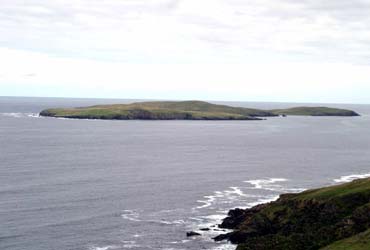 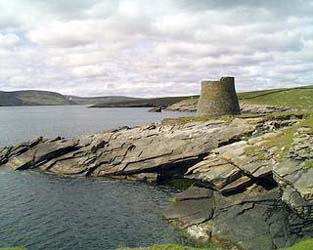 The island of Mousa lies just off the eastern coast of the south mainland of Shetland. The ferry which runs daily trips to Mousa departs from Leebiton slipway in Sandwick which is about 14 miles south of Lerwick.
Mousa has been inhabited for at least 3000 years. It's only in the relatively recent past, in the 19th century, that the island was cleared of it's human population. The oldest signs of human presence are the Bronze age burnt mounds, which were believed to be communal cooking sites.

The world famous Iron age Broch is one of Scotland's most important prehistoric sites. Brochs are unique to Scotland and Mousa Broch is the best preserved example of this type of stone structure in existence. The Broch was built over 2000 years ago when disputes over land were common and every community needed a stronghold to protect themselves.

The Norse Orkneyinga saga recounts that in 1153 Erland abducted Margaret, the mother of Earl Harold, and took her to 'Moseyarborg' where everything had been made ready. Earl Harold besieged the Broch but found it 'an unhandy place to attack'. Eventually the two sides reconciled and Erland married Margaret.

​Around the ruin of the Haa or Lairds house you can still see the remains of the crofters houses left abandoned when the land was cleared in the 19th century. Nowadays Mousa is visited by people not only to see the Broch and the island but to see the amazing wildlife, in particular the storm petrels, which now call Mousa their home.
Books. DVD's and Videos

None available to my knowledge with any great content about Mousa. This is not an island which seems to have merited much space in the history of our country. Several Shetland/Scottish Islands books mention Mousa in passing, but nothing to merit buying any of them for information on this abandoned isle.

As ever please contact Lonely-Isles if you know of any books you think would be of interest and we'll add them to the site.
Links
Mousa Boat Trips - A trip to the island is an essential part of your Shetland holiday in order to see the wonderfully preserved Broch and the fantastic array of wildlife.

RSPB Leaflet - Information packed leaflet produced by the RSPB which contains an excellent history as well as all you'll need to know about the wildlife on and around Mousa.

Origin Art - Superb pictures of Mousa on the always excellent Origin Art site. This is one of the best sites around for Shetland pictures and is well worth a visit.

Visit Sheltands - If planning a visit to Mousa then you'll need to know more about the rest of the Shetland's...this site should help you find out all you need to know.
www.lonely-isles.com - All content © Paul M Clements / Deena C Clements unless stated otherwise.
For anyone in any doubt, this site is simply a hobby, not a commercial enterprise.
Proudly powered by Weebly