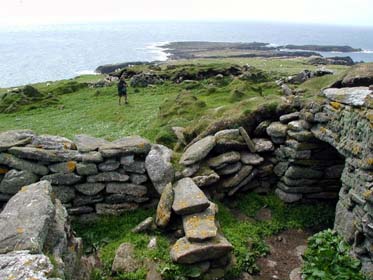 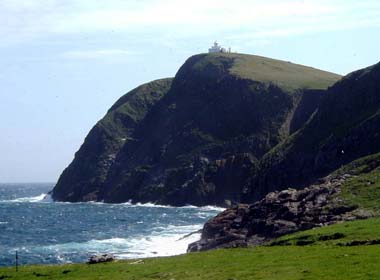 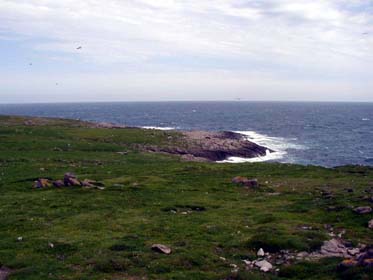 North Rona lies about 44 miles North of the Butt Of Lewis. The islands proper name is just Rona but it's commonly referred to as "North" Rona because of the other Rona, known as "South" Rona, which lies to the east of the Isle Of Skye. About 10 miles to the South West of Rona lies Sula Sgeir famous for it's gannet colony which is visited by the people of Lewis once a year in a ritual collection of guga (young gannets) for eating.
The most northerly island of the Outer Hebrides ever to have been regularly inhabited, North Rona was lived on for many centuries. It is 44 miles north of the Butt of Lewis, further offshore than St Kilda, and had a flourishing community in 1549.
​
It seems to have been maintained at around 30 people with any excess moving to Lewis. But in 1680 the community was devastated by an invasion of rats and a raid by a passing ship which destroyed all the island foodstuffs. All the people died. A resettlement ended in disaster around 1695 in some sort of boating tragedy. After that it was only inhabited by a shepherd and family until 1844 when it was deserted.
Nowadays the only inhabitants of Rona are sheep and seals. The sheep are tended by farmers from Ness in Lewis and the seals are studied by visiting students.
Books. DVD's and Videos

Northern Light Charters - Superb website which contains many excellent images of the Scottish Isles...including Rona. If you fancy the idea of visiting Rona and other lonely islands such as St Kilda then this is the site to check out. Runs regular charters throughout the summer months so weather permitting you could be on your way to Rona !!

Charles Tait Photography - Excellent selection of images from North Rona.
www.lonely-isles.com - All content © Paul M Clements / Deena C Clements unless stated otherwise.
For anyone in any doubt, this site is simply a hobby, not a commercial enterprise.
Proudly powered by Weebly