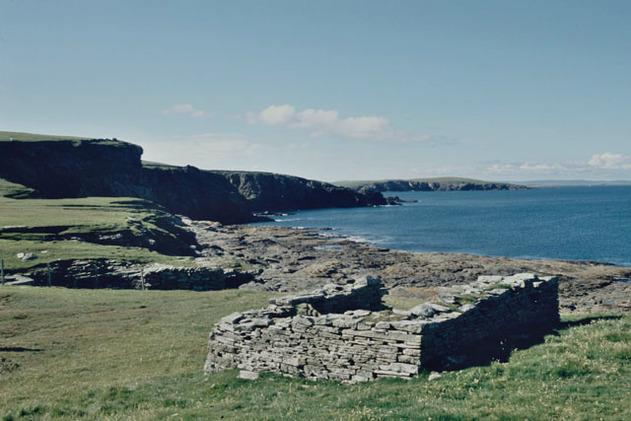 Noss lies to the east of Lerwick and is separated from the Shetland capital by the neighboring island of Bressay. Noss covers an area of nearly 850 hectares and it's highest point is the 600ft cliffs of the Noup o' Noss.
A small chapel existed in front of the old homestead at Gungstie in 1633, apparently built by people who had been shipwrecked on Noss. The walls were still standing in 1774 and the burial ground beside the Sound was used until the middle of the 19th century. There is good reason to believe that the chapel site was originally Celtic and pre-Norse but sadly the burial ground is now being eroded by the sea.

The homestead was built some 400 years ago and for a time was the only inhabited house on the island. In 1869 the Marquis of Londonderry leased the island and turned it over to pasture for his prize breed of Shetland stallions. These were used in his Durham coal mine as a substitute for child labour. The mares were kept on the neighbouring island of Bressay to allow for controlled breeding.

The famous Cradle of Noss has not existed since Mr Walker, the factor, ordered its removal in 1864, and had a wall built along the precipice. The cradle, slung in July and dismantled in November, consisted of a box on two cables, large enough to hold a man and a sheep. It crossed from Noss to the Holm of Noss, thus allowing the 164' Holm to be grazed, but probably doing little for the nerves of the man who transported the sheep.

The population reached a peak of 24 in the 19th century, but by 1939 the last permanent resident had left. The 774 acres that make up the island of Noss, has been a National Nature Reserve since 1955. This island whose dramatic outline rises from sea level to a height of 180 metres at the Noup, is home to puffins, gannets, fulmars, herring gulls, kittiwakes, guillemots, razorbills and more. Great and Arctic skuas nest in the broken ground along the cliff edge. The horizontally bedded sandstone has eroded, forming ledges that allow nesting sites for the seabirds. There are 150 species of flowering plants on the island.
​
Noss, now owned by the Garth Estate, and jointly managed with Scottish Natural Heritage can be visited from mid-May until mid-August and is reached by first catching the ro-ro ferry to Bressay, then crossing the island and catching an inflatable boat to Noss.
Books. DVD's and Videos

None available to my knowledge with any great content about Noss. Several Shetland/Scottish Islands books mention Noss in passing but nothing to merit buying any of them for information on this abandoned isle. As ever please contact Lonely-Isles if you know of any books you think would be of interest and we'll add them to the site.
Links
Shetland Heritage - Details on both Bressay and Noss from the Shetland Heritage series of pages.

​Noss And Bressay Cruises - Fancy a trip to Noss and Bressay ?...well why not give these people a try.
www.lonely-isles.com - All content © Paul M Clements / Deena C Clements unless stated otherwise.
For anyone in any doubt, this site is simply a hobby, not a commercial enterprise.
Proudly powered by Weebly