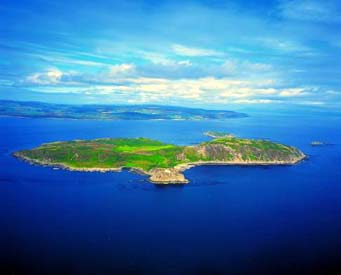 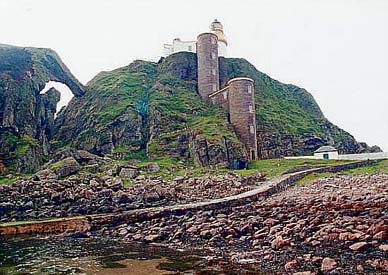 The privately owned island of Sanda is to be found 2 miles off the Southern tip of the Kintyre Peninsula. The island covers an area of almost 130 hectares and rises to a highest point of just over 400 feet.
In ancient times the Danes frequently gathered at Sanda, their principal fortress being a mile distant at Dunaverty. The Norwegian King Hacon visited in the 13th century, and a stone reportedly covered his remains in the graveyard. In times of danger at sea people would wash the stone and chant an ancient rhyme invoking his help.

Sanda was once in the possession of the monks of Whithorn in Galloway. The chapel is associated with the followers of St Columbus, and was probably visited by his follower, St Ninian, to whom the chapel is usually dedicated. However, it may originally have been dedicated to St. Adamnan, Abbot of Iona and biographer of St Columbus in 680. The present chapel ruins date from the middle ages, and the graveyard walls encircle two important ancient stones. One a massive rough hewn cross may mark the remains of the holy man Senchanns and his fourteen sons, or followers. It is supposedly unlucky to cross the graves. The monks relinquished Sanda in 1493.

In 1720, Sanda's isolation was put to use. The nearby Sheep Island, used as extra grazing by Sanda, was used to quarantine the crew of a local fishing boat, who were suspected of carrying cholera. They were stripped of their clothes and banished to Sheep Island for forty days quarantine.

The Macdonalds, one of Scotland's earliest clans, have historically been associated with Sanda. Descended from the powerful Lords of the Isles, and of Argyll and Kintyre, the earliest Macdonalds had close links with Ireland. It was Angus Macdonald, in 1493, who fled to Sanda for sanctuary, and who there later founded the House of Macdonald of Sanda.

Sanda and one other mainland farm were the last lands held by the Macdonalds, and these were finally sold in 1929. Prior to this, Sanda had been a tenanted farm. Alexander Richie acquired the tenancy in 1845. He had the Schoolhouse built for his children, and a dominie (schoolmaster) was employed, who lived with the family in the farmhouse.

The Russell family tenanted Sanda from 1919 and purchased it in 1929. They farmed Sanda for exactly 50 years before selling to Jack Bruce of the pop group 'Cream' in 1969. Sanda was sold to the 'Safeway' financier James Gulliver, a local man, in 1976, and again in 1979 to a Mr Changezie. In 1989 it changed hands once more when Dick and Meg Gannon, purchased Sanda along with the neighbouring Sheep and Glunimore Islands.

The Island was primarily a farm, with 350 sheep and producing a similar number of lambs each year, Sanda soon diversified into holiday lettings, with three cottages in former lighthouse buildings, on the South side of the Island, and a further three renovated cottages near to the pier and farmhouse, on the North side. Facilities included a library and games room, snooker room and an island tavern. In 2010 new owners came to Sanda, but things didn't quite go to plan. As far as I can see the Island is still available to rent, but the long-term future seems unclear.
Books. DVD's and Videos

​None available to my knowledge with any great content about Sanda Island. This is not an island which seems to have merited much space in the history of our country. As ever please contact Lonely-Isles if you know of any books you think would be of interest and we'll add them to the site.
Links
Vladi Private Islands - Fancy hiring Sanda for a week? Well it appears you can.
​
Campbeltown - If planning a trip to Sanda you'll more than likely go by boat from Campbeltown. Undiscovered Scotlands always excellent website has a good page on the town.
www.lonely-isles.com - All content © Paul M Clements / Deena C Clements unless stated otherwise.
For anyone in any doubt, this site is simply a hobby, not a commercial enterprise.
Proudly powered by Weebly