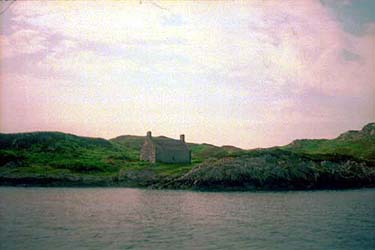 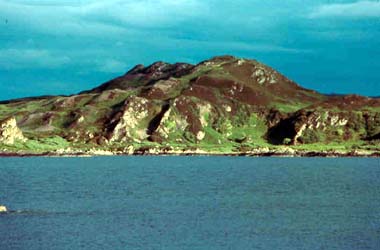 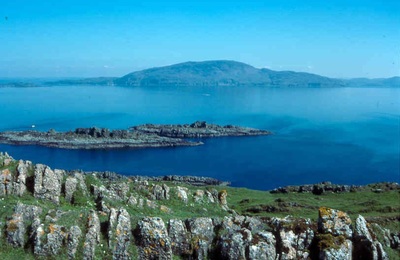 Scarba is to be found about half a mile across the Strait of Corryvreckan to the north of the island of Jura. Forms part of the the Scarba, Lunga and the Garvellachs National Scenic Area.
Scarba is set between the famous Corryvreckan whirlpool to its south and the notorious Grey Dogs tidal race to its north in the narrow passage over to the neighbouring island of Lunga. The Grey Dogs run at about 8 knots. The passage to Scarba is hazardous at the best of times. Scarba's long abandoned community and had a reputation for healthy living and longevity (a woman in the 17th century lived until she was 140!).

Many myths abound and the island is considered the haunt of ghosts and faeries. St Columba's monks used it on occasion and until recently it was a testing ground where schoolchildren were trained in self-sufficiency before being taken by boat to various uninhabited islands and abandoned for a few days.

There are said to be many great caves on Scarba and what could have been a processional way running from steps cut in the rock on the east side of the island along a serpentine path to The Point of the Maidens above the Corryvreckan. Here there are the stone remains of three circular buildings. Here, too, a womb shaped lochan empties its waters into a stream that flows out towards the whirlpool.

Nothing out there, to my knowledge, with any great content about Scarba. This is not an island which seems to have merited much space in the history of our country. As ever please contact Lonely-Isles if you know of any books you think would be of interest and we'll add them to the site !!
Links
Electric Scotland - Interesting site which includes the full text of a book called "Netherlorn and it's Neighbourhood". One of the chapters of the book is all about Scarba.
www.lonely-isles.com - All content © Paul M Clements / Deena C Clements unless stated otherwise.
For anyone in any doubt, this site is simply a hobby, not a commercial enterprise.
Proudly powered by Weebly