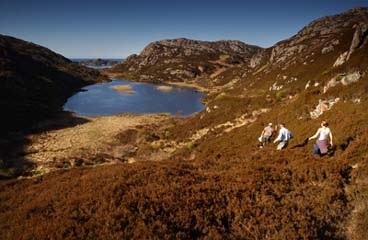 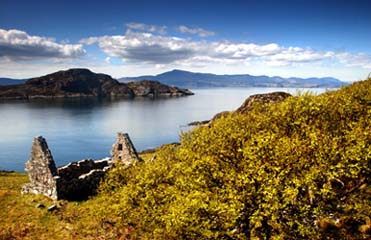 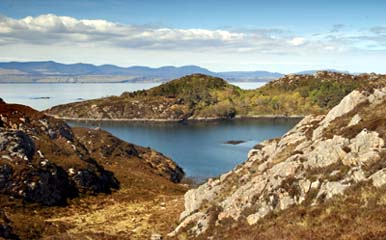 Rona, sometimes referred to as South Rona to distinguish it from the Rona found 40 miles North of Lewis, is to be found just north of the island of Raasay, to the west of Skye.
Up until the 1840's Rona was the property of the McLeods but through various failed ventures they found themselves in debt and had to sell the island. The new proprietor of Rona, and its neighbour Raasay, was George Rainy who was seen as something of a philanthropist and he did his best to negate the effects of the potato famine. Rainy didn't last long as owner and neither did his son who died only 10 years after inheriting the island from his father.

The next in a long line of owners was George MacKay who forced up the rents and within three years had sold the islands for a handsome profit to another Englishmen William Armitage. Only 18 months later the island once again changed hands as Herbert Wood became the latest owner. Wood imported deer, pheasants and rabbits and cleared the best agricultural land on Raasay which put even more pressure on Rona. In time Parliament recognised the rights of crofters and from 1886 existing holdings were protected putting an end to continual changes in land use as decreed by whoever owned the islands.

Life continued to be a struggle on the rocky island of Rona and the small settlement in the north at Braig was abandoned in 1889. After the first world war seven of Rona's ex-servicemen decided to leave the island and stake a claim on their ancestral land at Ferans on Raasay. Known as the 'Rona Raiders' they were arrested and put on trial, but public support saw them freed and allowed to return to the land they had claimed. The outcry created by this incident saw the islands of Raasay and Rona purchased by the Scottish Board Of Agriculture in 1922.

By now there were around 15 families left on Rona at Doire na Guaile, Acairseid Mhor (Big Harbour) and Acardeid Thioram (Dry Harbour). However, by 1930 the numbers had dropped to just two tennant families. The last of these, the MacRae's, left in 1943 and the struggle for survival on Rona was over. Nowadays the island is owned by a Mrs Jensen who has renovated the harbour as well as converting the mission house at Dry Harbour into two holiday cottages. The islands sole permanent inhabitant is the land manger, Bill Cowie.
Books. DVD's and Videos

Nothing out there, to my knowledge, with any great content about Rona. This is not an island which seems to have merited much space in the history of our country. As ever please contact Lonely-Isles if you know of any books you think would be of interest and we'll add them to the site !!
Links
Isle Of Rona - Islands main web presence is this superbly put together site. Includes some excellent pictures (as used above) as well as plenty of history. Here you can also see and find out about cottage where you could spend a holiday on this lonely island.
www.lonely-isles.com - All content © Paul M Clements / Deena C Clements unless stated otherwise.
For anyone in any doubt, this site is simply a hobby, not a commercial enterprise.
Proudly powered by Weebly