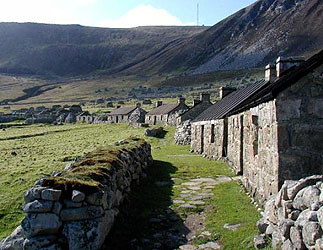 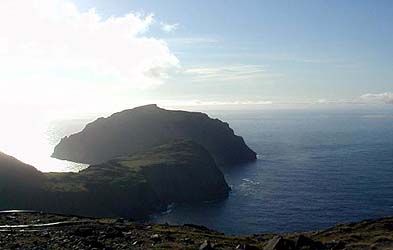 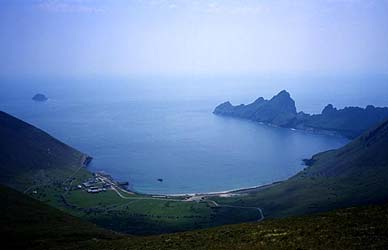 Village Bay, Hirta
The archipelago of St Kilda, the remotest part of the British Isles, lies 41 miles (66 kilometres) west of Benbecula in the Outer Hebrides. The islands which make up the archipelago are Hirta, Soay, Dun and Boreray. The only permanently inhabited of the islands was Hirta where Village Bay was home to the St Kildan until time came to leave in 1930.
There have been people on St Kilda since prehistoric times, exploiting the rich resources of the sea, growing crops and keeping animals. It is not clear when the first settlers came to St Kilda, but simple stone tools found on Hirta suggest that Bronze Age travellers may have visited St Kilda from the Western Isles some 4,000 to 5,000 years ago.

In more recent times, a small population - about 180 in 1697 - rented the land from a distant landlord, latterly the Macleods of Dunvegan in Skye. They lived in a small settlement in Village Bay with seasonal dwellings (summer shielings) in Gleann Bay.

The landlord rented land to the islanders through a factor who collected the rents on his annual visit to St Kilda. He was represented by a Ground Officer, a St Kildan, who dealt with the islanders on a day-to-day basis. Until the late 19th century, rents were mainly paid in kind. The factor sold the produce, and supplied the islanders with imported goods. 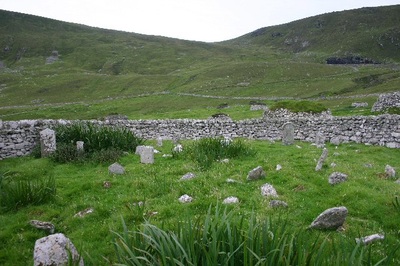 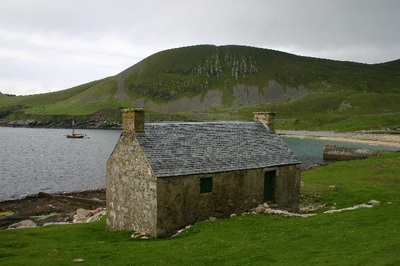 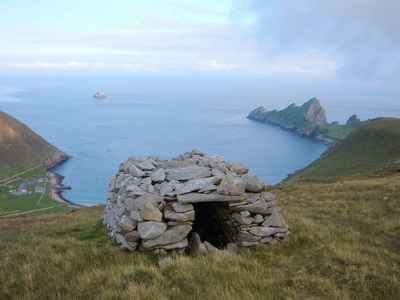 Cleat
By the mid 19th century there was increasing contact with the outside world. A steam yacht - the Vulcan - visited St Kilda in 1838. From 1877 the SS Dunara Castle began regular summer cruises to St Kilda, and was soon joined by others such as the SS Hebrides.

The gradual loss of self-sufficiency and morale had begun - this was to end with the evacuation of the islanders in 1930.The archipelago is now owned by the National Trust for Scotland. It became one of Scotland's four World Heritage Sites in 1986 and is one of the few in the world to hold joint status for its natural, marine and cultural qualities.
Books. DVD's and Videos

Links
St Kilda (NTS) - St Kilda site established by the National Trust For Scotland. Excellent source of information about the islands as well as having a well used guestbook which is a good point of contact for other people interested in these fascinating islands. Site is also available in Gaelic.

Northern Light Charters - Superb website which contains many excellent images of the Scottish Isles...including St Kilda. If you fancy the idea of visiting St Kilda and other lonely islands such as Mingulay then this is the site to check out. Runs regular charters throughout the summer months so weather permitting you could be on your way to St Kilda.
www.lonely-isles.com - All content © Paul M Clements / Deena C Clements unless stated otherwise.
For anyone in any doubt, this site is simply a hobby, not a commercial enterprise.
Proudly powered by Weebly