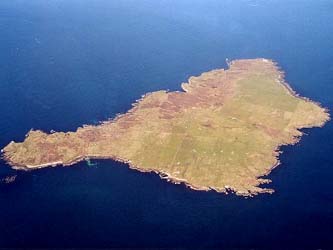 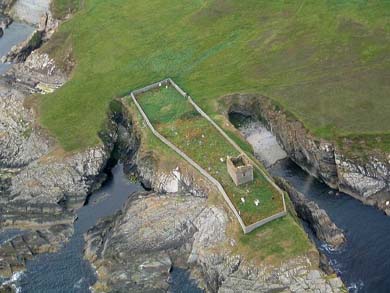 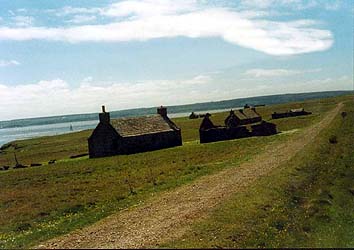 The island of Stroma is situated two miles off the north coast of Caithness and is one mile long by half a mile wide. Stroma is offically part of Caithness and is not one of the Orkneys. The Orkney islands of Swona and South Ronaldsay lie about 10 miles or so to the north of Stroma.
The island which shows traces of archaeological evidence from Neolithic times to the Viking age when Stroma, lying in the heart of the Pentland Firth, held a strategic position between Orkney and the Caithness mainland.

Towards the end of the 18th century there were thirty families living on the island in the two straggling townships of Nethertown (belonging to the Freswick estate) and Uppertown (Mey estate) with a modest harbour on the south shore. Although the fertile eastern half of the island had the reputation of producing good corn, the people depended mostly on the sea for their living, with many men earning a useful living from piloting vessels through the Pentland Firth. Others followed the mercurial herring from Shetland down to the west Highlands. The quality of the produce of the sea is emphasised by Calder (1887) 'The finest cod in the north is to be got in the Pentland Firth... Large and excellent lobsters are caught around the island'.

​Despite their renowned skills as boatbuilders and seamen, tragedy often struck the small community in the treacherous seas around them. These waters also claimed a large number of vessels that attempted passage through the Pentland Firth, leaving the islanders occasional and welcome windfalls of timber and goods. Stirring tales of contraband, illicit distilling and pursuit by the excisemen are numerous. The islanders had their own whisky still in a little cave called 'The Malt Barn' in the huge gloup (blow-hole) on the west coast. 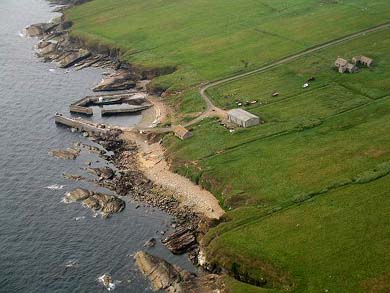 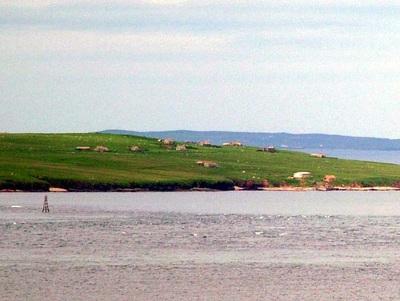 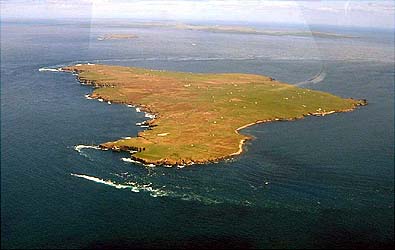 With their own 'distillery' rich fishings, piloting and crofting, life, superficially at least, seemed agreeable enough, but twentieth century man wanted broader horizons. By the end of the Second World War the economy of Stroma began to break down as the younger people were attracted to the mainland by higher wages. Parents often followed. The many jobs available during the construction phase of the Atomic Energy Authority's plant at Dounreay in the mid 1950s were, economically the final straw.
​
Following depopulation, the island was bought by Jimmy Simpson, a Stroma man, who now farms the land rearing large numbers of sheep and cattle.... The people have gone from Stroma but the expanding colony of Arctic terns gives vibrant life to the low green isle of the Pentland Firth.
Books. DVD's and Videos

Visit book's Amazon page
Links
Stroma - History Project - As part of a history project a pupil from Wick High School put together this very informative website all about Stroma.
​
Caithness.Org - Caithness community website which has an excellent page on Stroma. There are a few broken links but there is still a good selection of images and history to choose from.
www.lonely-isles.com - All content © Paul M Clements / Deena C Clements unless stated otherwise.
For anyone in any doubt, this site is simply a hobby, not a commercial enterprise.
Proudly powered by Weebly